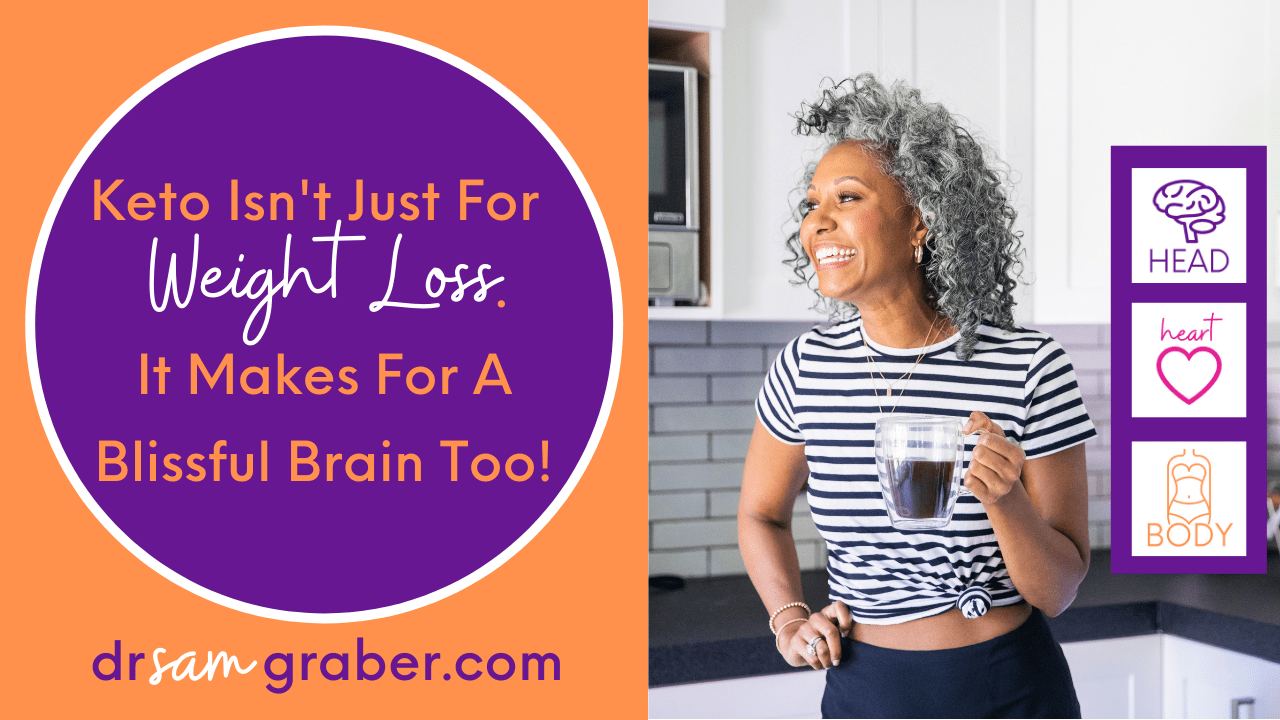 Keto Isn’t Just For Weight Loss. It Makes For A Blissful Brain Too!

Nearly everyone has at least heard of the ketogenic “diet” by now.  Most of the buzz is centered around its ability to help us shed unwanted fat.  You probably have a relative, coworker, or friend who looks for any reason to praise the ketogenic way of eating.

You may even know an evangelist or two.  I respect their enthusiasm, and often I may even match it.  But I’ll go on record that some of them drive me crazy.  It’s okay to admit it if you feel me.

Look around, mental health issues are steadily on the rise.  You can’t scroll your social media feed without some reference to mental health. Depression and anxiety are more prevalent than ever, along with more and more cases of bipolar disorder and schizoaffective disorder being added into the mix.

While some may limit the mental health field to psychiatry, there are neurological components to many mental health disorders.  At the hub of your neurological system is your brain. The brain is a very powerful tool and it needs fuel to carry out its multitude of functions.

Fun Fact:  The human brain only amounts to 2% of total body weight yet uses approximately 20% of the energy supply.   Greedy little bugger, eh?

The honest answer is nobody really knows for sure.  There have been studies of course, but researchers are vastly under-funded and the data isn’t completely reliable.  And then there’s the research bias that runs amuck in many academic circles.  Seeing that this is the reality, when reading “research” you must take research bias into consideration and, say it with me, “Follow The Money”.

In other words, who is funding the study?  Who is paying for the building in which said study’s key players work?  Who’s providing the equipment? And who stands to make money when the “research” supports position X or position Y?

I’ve become quite skeptical of all things “research” because it is rare not to have some shenanigans at work when it comes to researching food.  Since you can’t patent an unadulterated product of Mother Nature, there’s not a whole lot of incentive for a company to pump funding into researching the ketogenic way of eating.  My protocols include real food and real food only.  No products, potions, powders, or pills on the menu!

Research inadequacies range from either the ketones or state of ketosis not being verified, no control group involvement, people dropping out of the study, or mental health care providers were simply relaying a few success stories on their own clients while lacking an official study. And those are just a few of the many variables to pay mind to when looking into the study parameters.  These parameters are the big billboard on Times Square in NYC telling you what weight you should give to the “findings”.

The studies needed to prove correlation between the ketogenic way of eating and reduced or eliminated mental health issues would take years to complete and tons of money.  And boatloads of people.  People who can stick to an eating plan that promotes ketosis, specifically.

From the information that has been gathered to date, researchers are led to believe that the fuel provided to the brain could be responsible for the decreased mental health problems in those eating to attain and maintain ketosis. There is mounting evidence that the answer lies within the mitochondria, our cellular powerhouses. More on that in upcoming blog posts.

Deductive reasoning (a skill lacking in many) leads us to connect some critical dots. Since both mental health issues and seizures have neurological factors, logical thinking leads us to believe the same positive benefits could apply to a wider range of people.  Ketosis has amassed massive metabolic street cred for its incredible ability to control seizure activity in children for whom seizure meds were ineffective.

The Ketogenic Way Of Eating Vs The Standard American Diet

In case no one has explained it yet, the ketogenic way of eating limits carbohydrates to a max of 20 grams daily and uses a higher (healing) fat content along with adequate protein as a baseline strategy.  Limiting carbs forces the body to switch from being a glucose-burning machine to a fat-burning machine.  Some experts allow for a max range of 20-50 grams of carbohydrates in the daily intake.  This carb/fat/protein trio helps one’s metabolism to be altered into what is called a ketogenic state.  It usually takes less than 72 hours to get into a ketogenic state.  There are a few variables that can alter this timing, but for our purposes here, these qualifiers will suffice.

The key here is to dial into the sweet spot (the intersection) where the individual is producing measurable ketone levels and where they feel good.  Feeling good is critical to long-term success, as is the case in most everything in life, am I right?

You may have taken notice that I use the term “way of eating” in lieu of “diet”. That is very much on purpose. The word “diet” is taken out of its true context the majority of the time. Eating to promote the nutritional state of ketosis is a way of eating, not a diet. While we’re reviewing terminology, “ketogenic” simply put is an input that promotes the production of ketone bodies through the breakdown of dietary or stored fatty acids and certain (ketogenic) amino acids as indicated by blood, breath, or urine testing for ketone bodies.

The Standard American Diet (aptly abbreviated as S.A.D.) doesn’t limit carbs and it’s not unheard-of to consume 200 grams of carbohydrates in a single day.

In any Italian restaurant it’s entirely possible to eat that amount of carbs in a single meal; Bruschetta appetizer, spaghetti and meatballs as the main dish, and of course the tiny loaves of bread to nosh on while waiting to be served. In my mind bread was just a handy vehicle for butter.  So now I just say “hold the bread, bring extra REAL butter!” And don’t forget about the tiramisu!  The carbs are racking up.

This is where science should be giving the answers, but as noted above, researchers are basically winging it on what is known to date.  There are several changes when fat-burning takes over and glucose is no longer the main fuel source:  the presence of ketones, lower blood sugar, and less insulin production.

The Million-Dollar Q:  “Is it one of these biochemical responses or the combination that creates a blissful brain?”

It might be years before anyone really has a definitive, scientifically based answer.  The body and brain love synergy, so I am prone to think it is the combination of these positives that creates a trifecta of brain bliss.

The general consensus is the brain may prefer ketones as fuel due to their anti-inflammatory properties.

Let’s apply this to one of my favorite topics…food! What snack would make for a more blissful brain? A plate of vegan cheese pizza rolls, or a plate of ham wrapped, cream cheese slathered dill pickles?

Think of it this way…which one leaves you feeling bloated, groggy, brain-dead and seeking a nap?  While the alternate choice provides a clean fuel that sustains steady energy until the next mealtime.

Double Whammy of the Best Kind

Not only can the ketogenic way of eating be beneficial for weight loss, the studies are showing promising results for mental health issues as well!

When one loses weight in the form of body fat, it feels good on the inside and the outside.  Fueling the body with the right ratio of macronutrients (proteins, fats and carbohydrates) is like using premium gas for your vehicle.

As the inside is working much more efficiently and weight loss begins, body image gets a hit of positivity.

The ketogenic way of eating could also be an alternative for those who are unable to afford psychiatric medications or who just want to try a more holistic approach.  It is certainly worth giving it the ol’ college try! Maybe mental health related medications haven’t been as successful for you as expected.  Or maybe you’re one of the many who experience nasty side-effects from them. The reasons to try the ketogenic way of eating are endless and the list of reasons not to try pales by comparison.