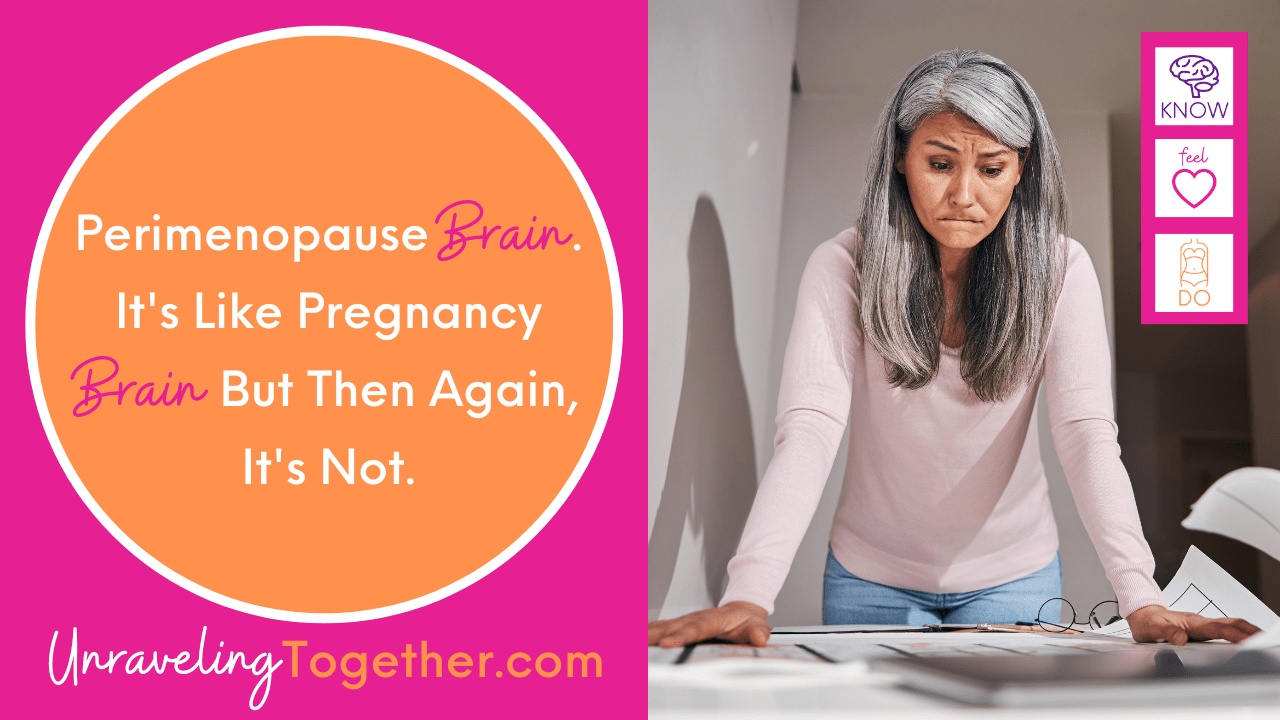 Perimenopause Brain. It’s Like Pregnancy Brain But Then Again, It’s Not.

Pregnancy and perimenopause are natural phenomena unique to the female body.  One common accompaniment to both is a temporary change in brain chemistry.

You’re more than likely familiar with “pregnancy brain”.  In fact, you may have experienced it first-hand, or “in sympathy” with your partner like that 15 pounds you gained alongside her.

Similar, Yet Oh So Different

Similar in physiology to the behind-the-scenes shifts in the pregnant brain, there is a lesser known experience unique to those of us wrapping up our reproductive phase of life. That side dish to the main course (perimenopause) is brain fog, or what I lovingly refer to as “perimenopause (peri) brain”.

Pregnancy and peri brain are similar in physiology as far as they both stem from changes in the hormones flowing around, but our pregnancy brain resolves shortly after that pregnancy ends.

In contrast, brain changes accompanying perimenopause can last much, much longer. Years and years longer in fact.

Physiology aside, I’d be remiss not to mention that people are much more forgiving toward our forgetfulness, the occasional word loss, and our momentarily scattered selves when there’s a “Baby On Board”.

When it’s perimenopause brain, those around us can be far less forgiving.  Especially at work.

At work, a pregnant woman finds herself in a protected group.  Not so much when that same woman transitions into her perimenopause phase of life.  She is met, often rather harshly, with the progressive plagues of ageism and sexism.  And if she is LGBTQ+, BIPOC, or another layer of non-cis and other than “white”, the ‘ism stack can be crushing to her psyche, wellbeing, and her career.

It’s Not A Tumor, Nor Is It Early Onset Alzheimer’s*

Everyone born with ovaries will experience a variation on the theme of perimenopause and may therefore endure the frustration of peri brain.  Those who work with them, live with them, and care about them need to understand how this natural stage in a person’s life can impact all aspects of their life so they can support the person deep in the throes of perimenopause.

Here’s a bit of basic biochemistry to get us on the same page.  Menopause is technically one day. It is reached when we go 365 days without anything resembling our period.  Menopause can also be reached through medical intervention and is effective immediately upon removal of the ovaries.  This is a more abrupt experience than that of someone who experiences her full, natural perimenopausal transition.

The abruptness also compounds and complicates the recovery period from all aspects.  When a woman has had a hysterectomy (uterus removal) and oophorectomy (ovaries removal), please be patient.  She’s undergone a massive change and it may take her body and brain more than a short-term leave to adjust.

Perimenopause is the period of time prior to our menopause. And perimenopause is reported to be somewhere in the neighborhood of 5 to 10 years.  Look at it as the hormonal runway prior to the total rework of a female’s hormone profile. This runway allows time for our body and brain to adapt. The longer the runway, the less jarring during that final lift-off, so to speak.

There’s no medical test for perimenopause, per se.  And therefore, you can’t go to your doctor for blood work that shows a Negative or Positive result.

I’ve seen it noted that some 60% of women in midlife report experiencing undesirable changes in their memory, as well as their cognition (comprehension or understanding of concepts). Some women worry they have an early onset of Alzheimer’s when left to draw their own conclusions without the right resources to consult.

When these brain changes occur alongside changes in your menstrual cycle, it is more likely to be perimenopause brain than Alzheimer’s.

What Is Perimenopause Brain?

Brain fog is the culmination of issues traced back to the effect midlife hormonal shifts have on the brain.  It is one of the often noted 34 “symptoms” of perimenopause.  You’ll see the term “symptoms” when reading about perimenopause, I want to remind you that menopause in all her stages is a natural phenomenon, not a disease.

From tasks of daily living to trying to hold a casual conversation, our foggy brain can be a nuisance.  Add stress to that, such as when we’re at work or taking on an unfamiliar task, and brain fog can elevate from nuisance to interference.

A Silver Lining To The Cloud (Or At Least The Fog)

While many women experience perimenopause brain, studies indicate the situation will improve after menopause. In fact, as told by many a postmenopausal woman, their brains are functioning better than ever once the peri-related brain fog clears.

All that to say, even if you are smack dab in the middle of this phase of life and feel like you are living in a perpetual haze, there is a light at the end of the proverbial tunnel.

People of all genders can experience brain fog at any point in life. It is a common response to a heightened state of stress such as when we’re coming up to a big deadline, or someone has just laid something heavy on us.  The hormonal changes during our perimenopause absolutely qualify as a stressor.

Longer answer: abrupt fluctuations in our assertive sex hormones (estrogen and follicular stimulating hormone) layered upon a slow and steady decline in our nesting hormone (progesterone) hijacked by the wild ride of our stress hormones (most notably, cortisol).

I am not sharing this to alarm you.  I share to inform you of what is at work behind the scenes and to help you prepare for these changes as best you can.

The most impactful thing you can do is to get your stress response under control.  Another highly impactful thing you can do is to become metabolically flexible.  You do this through adopting a way of eating that keeps insulin super low so you re-sensitize your cells to it.  Insulin resistance, which is rampant and an underlying factor in chronic diseases, is reversible and preventable.

*Big Ol’ Asterisk On The Play

Just because you or others are noting changes in your cognition or memory alongside changes in your period, it does not indicate that you don’t have early onset Alzheimer’s or some other major brain issue.

Having an established holistic, Whole Self team in place is key to navigating the midlife waters and deciphering which peri-associated issues are just that, and which are ones to further explore.