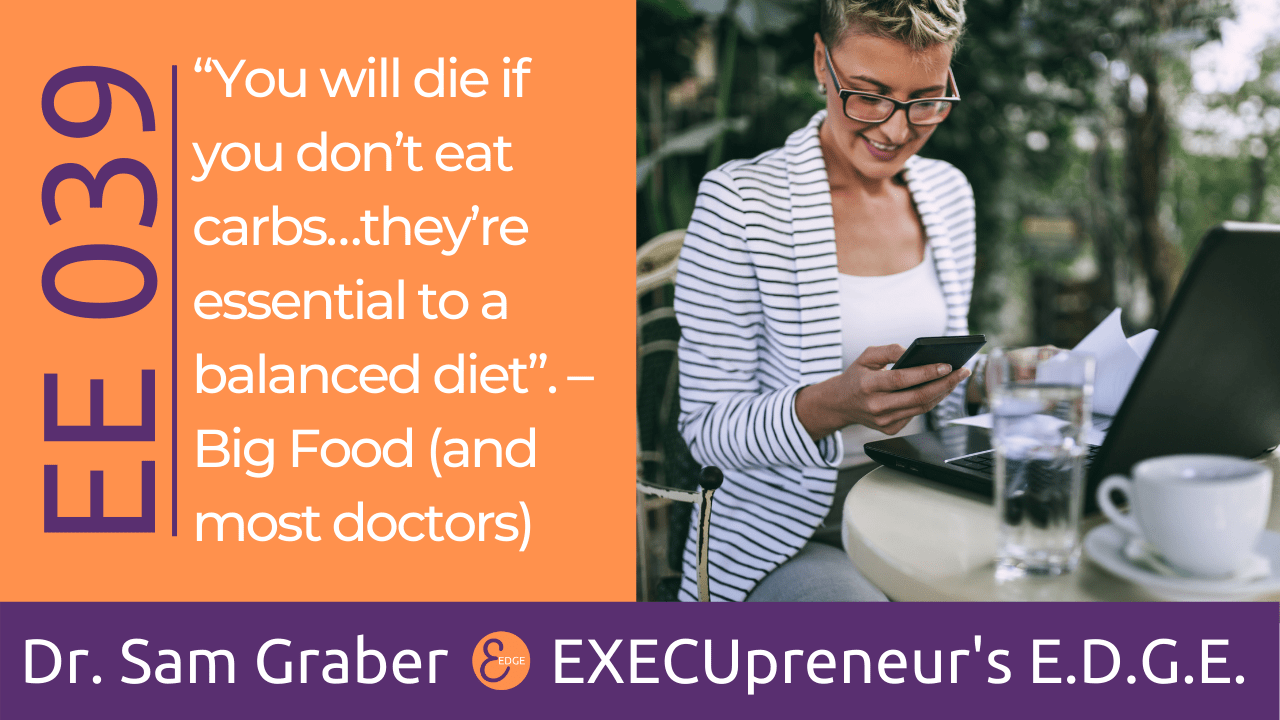 EE 039: “You Will Die if You Don’t Eat Carbs…They’re Essential to a Balanced Diet”. – Big Food (and Most Doctors)

“You won’t die.  In fact you may feel better than ever if you dial back the carbage.” – Dr. Sam Graber

It’s common knowledge that carbohydrates provide glucose for use within the human body.  Most cells use said glucose as a fuel source.  When the body is glucose driven, it needs it…lots of it.  The carbohydrate (carb) is the easiest macronutrient to breakdown into usable fuel…along with the messiest.  Think coal when you think carbs.

The Dietary Guidelines for Americans* recommends 45-65 percent of our daily energy needs be met through ingesting carbs.

(*View the most recent guidelines here.  Scroll right to your gender and age range.  You may notice their recommendations are the exact same no matter the age, or gender, or caloric intake, though they mention their calculations are based upon a 2000 calorie daily intake.   What 7 year old needs 2000 calories? This is highly suspect, but I will dive deeper into that later.)

As you’ve seen in old-time movies, shoveling coal into the train’s furnace creates billows of dark smoke and intense heat.  Keeping that energy up requires a ton of coal, quite literally.

It is similar when it comes to your body’s need for fuel. When it is burning inefficient carbs (coal), it requires an immense amount of them.  As you burn more and more carbs, more and more junk is released in the process.  Unlike the train, that junk is trapped in the body and now it has to be used up…or stored.  Much of the leftover junk is stored in body fat.

Burning carbs for fuel results in an increased amount of ROS (Reactive Oxygen Species) AKA oxidation…which is like internal rusting of the body and its parts.  This is why antioxidants are recommended when carb-fueled.

Unlike the process of burning fat for fuel, which I liken to the body’s very own version of jet fuel, a primary carb burner is left sputtering and dependent upon frequent shovels full of coal (carbs).

In his well-referenced article, Metabolic Effects of the Very-Low-Carbohydrate Diets: Misunderstood “Villains” of Human Metabolism, Anssi H. Manninen established that reducing carb intake triggers a beneficial physiological state known as ketosis.  This is a metabolic default setting where ketones flow from the liver and spare the need for glucose metabolism providing an alternate source of fuel for the body and brain (again, think jet fuel).

Ketosis is the natural state of the body.  We are born in ketosis.  It is our normal state as newborns and when breastfed.  Introduce formula and that all changes…drastically.  I suggest this is one of the main reasons breastfeeding is the better choice for a newborn when doing so is readily available.  I don’t judge, I had to bottle feed my babes in addition to breastfeed.  I was so stressed and I believe that is why I didn’t produce enough milk for them to sustain.  If I only knew then what I know now, I’d have gone Keto two decades ago!

Manninen’s report further states that there are no clear requirement for dietary carbohydrates in human adults.  He further notes that ketosis may offer therapeutic benefits for various different disease states, those common and those that are rare.

Manninen further comments on a landmark study that showed a very low carb diet resulted in significant reduction of body fat and a naturally accompanying increase in lean body mass in male subjects of normal body weight.  This is a really good thing!

There are absolutely no scientific studies that prove carbs are essential.  Or that they balance out the diet.

We need foods that have carbs, like vegetables and fruits…FYI: I am specifically referring to the non-GMO, unadulterated versions…because they provide essential nutrients and fiber.  Make no mistake, it is not the “carbohydrate” that is essential.  It is the nutrient alongside the carbohydrate.  It is the fiber.  These are the extent of our need for carbohydrate containing foods.

On a side note, Mother Nature doesn’t package carbs and fats like they do in the labs of Big Food.  These Frankenfoods are absolutely NOT necessary and should be avoided at all costs.

I find this amusing…I tell someone they need to break up with carbs and all of a sudden they’re a researcher!  Now mind you, they’ve never researched anything related to what they eat before.  Not once did they look into the C.R.A.P. contained in their family size bag of Doritos that they polish off binge-watching “This is Us“.  They didn’t look into the artificial colors, nor artificial flavorings, nor the GMO crops, nor the nasty canola oil…nor had they taken the time to look at simple Biochemistry since they were in high school.

This is absolutely ridiculous behavior, wouldn’t you agree?  Allow me to illuminate the reason for my “doing my research” amusement.

Unless someone has years of experience culling through statistics, reading scientific papers, deciphering good data from junk, uncovering the money trail and other skills required for doing proper research when it comes to human health…your chances of coming to correct conclusions are little to none.  (Whew…that was a mouthful!)

It’s like me doing “research” on what TV to buy.  HD, LED, OLED, XYZ…seriously, I don’t know one from the other.  Nor do I care to become an expert.  But I do want to make the right decision, so I look to my trusted tech advisors for guidance.  Ultimately I decide, but I take their wisdom into consideration.

This is how I suggest you approach the topic of healthy eating.  Look to those who know what they’re talking about.  And when a deeper dive is required, they have the connections to those above their pay-grade.  These trusted advisors speak the language, can decipher truth from BS, and have a passion for educating others.

Shameless plug…Pick me as your healthy eating advisor!

I’ve got a team of experts at my disposal and you can too as a member of my private membership group”.

Let’s bring this full circle…back to carbs and glucose.  The presence of glucose directs the body to produce insulin.  It happens rather predictably in a relatively healthy human.  (Emphasis on “relatively healthy”.)  As long as the body can accurately meet the level of glucose in the blood with insulin production, all is well.

But for a whopping 35 percent of people over 40 it does not happen in a coordinated fashion.  They are insulin resistant and do not respond to insulin as designed.  Most people are producing adequate insulin, so the pancreas works mind you, but the cells are essentially ignoring the insulin.  Therefore the pancreas ramps up production…”You’re not paying me any mind…I’ll just make more, surely you’ll listen to me then” says the pancreas.  Only to fall on deaf ears, yet again.  Sort of like the “selective hearing” we develop as parents, or partners…am I right?

Many, if not most who are afflicted, don’t even know it.  The likelihood of becoming insulin resistant increases as the years roll by.  When the body is ignoring the orders from insulin, it is inefficiently utilizing its primary fuel source.  This happens when one is carb (glucose) fueled, such as when following the Dietary Guidelines for Americans 2015-2020, Eighth Edition.

It does NOT happen when fat fueled.

To review…the pancreas amps up insulin production and as it’s further ignored.  Therefore the body stores more and more body fat erroneously.  Because that is what excess insulin in the system does.  Constantly being bathed in an insulin bath has its deleterious effects on cells as well.

Signs of insulin resistance are many.  They can manifest as belly fat, getting “hangry”, cravings for foods high in sugar, Polycystic Ovarian Syndrome (PCOS), high blood pressure, scalp hair loss (men and women), swollen ankles, even skin tags, to name a few.  When you look and ask around, it is evident we are on the razor’s edge of a national health crisis.  And ground zero is insulin resistance.

WARNING…My Inner Geek Girl is coming out now:  Insulin does a whole host of things in the body and is one of the main regulating hormones.  If you’re over 40, your hormones have been blamed for pretty much everything that ails you…am I right?  “Must be your hormones.”  Often times we think only of the sex hormones: testosterone, estrogen, progesterone when we think “hormones”.  There are many more than those.  And insulin is a major player.  When the body stops listening to insulin, it is nothing short of disastrous.

Now technically you do suffer from a hormone problem…just not one of the few in the crosshairs of Conventional Wisdom.  One of the crux manifestations is that insulin resistance leads to your blood glucose level not being maintained in the healthy range.  This leads to Metabolic Syndrome which ultimately leads to Diabetes Type 2 (usually within 5 years after Metabolic Syndrome sets in) as well as a whole host of other named chronic diseases.

Look to your body’s relationship with insulin…does it have “selective hearing”?

Your body’s response to insulin is the key to growing wiser, not just chronologically older.  You don’t have to age like your parents.  You can opt-out of that future.  I will show you how.

Let’s stack the health deck in your favor together…it starts with accurate information.

RECAP:  There is no such thing as an “essential carbohydrate”.  The over-consumption of carbs has created a backlash in our health on many levels.  Excessive carb consumption over an extended period of time can lead to insulin resistance.  Insulin resistance leads to metabolic syndrome, which leads to Type 2 Diabetes.  The alternative fuel source is fat.  Being fat-fueled leads to a beneficial state of ketosis.  Ketosis is a natural metabolic state for the human body and mind.  Using healing fats for fuel is like burning jet fuel!