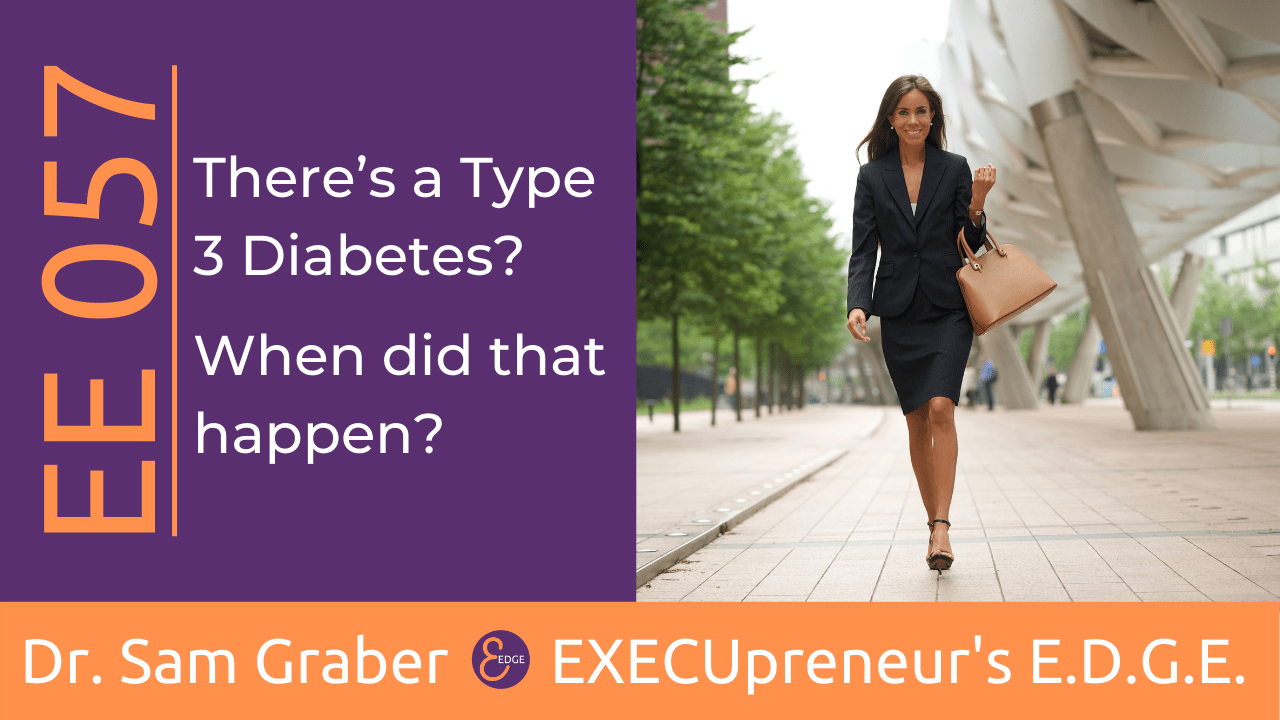 Yes…there is a Type 3 Diabetes.

The all-too-common and rising-in-numbers Alzheimer’s Disease is often referred to as Type 3 Diabetes.  Alzheimer’s Disease (AD) is associated with 50-80% of reported memory loss in people ages 65 and older.  It affects the way you think and your behavior. We used to just see AD in our elders, however now it is not uncommon to see people diagnosed with AD fall in a much younger age range, 40-50.

In the earlier stages, AD affects how we learn.  Then it may show up as forgetfulness and disorientation.  Then mood and behavior changes rear their ugly heads.  Personalities change along the way.  Families are often forgotten.  Ultimately those afflicted lose their lives.

Could this horrific decline be prevented?  We’ll explore that possibility in a moment.

Alzheimer’s’ disease and blood sugar levels are intimately related.  And the kicker, it doesn’t need to be a super high level of sugar dysfunction to seal one’s fate.

Evidence demonstrates that Alzheimer’s disease (AD) is not just genetic in nature.  But may be directly related to defects in the brain’s ability to metabolize glucose.

One’s risk for AD can be identified using 3D images of metabolic activity in the brain.

In one study, the images showed similarities among those who have the Apo E4 gene (a genetic predisposition for AD) and those who had fasting blood glucose (BG) levels in the high-normal range.  Mind you, these folks did not have the gene.

How high are we talking?

Still under the radar levels.  There were no *H’s* on their lab reports.  Seriously.  Levels that were not even high enough to be classified as Impaired Fasting Glucose (IFG), which is 100-125 mg/dl.  On average, the non-Apo E4 wielding high-fasting-BG folks had levels in the mid-90s.  This is still considered normal in medical circles!  Yikes!!

I have to add…the data did not include resting Insulin levels.  I am positive this number would have indicated a state of hyperinsulinemia and resultant insulin resistance.

So, what’s the take home?

If fasting blood glucose is a concern for you, as it really should be…here are 3 ways you can curb your risk.  And if you know you are a carrier for the Apo E4 gene, I strongly urge you to start ASAP.

Exercise to a moderate intensity a minimum of 5 days per week.  20-30 minutes is all you need if it’s intense enough.  When you’re exercising at this level, the body first turns to the readily available glucose (in your blood) to supply the muscles with energy.  Then when that isn’t enough to keep up with demand, it taps into stored glucose (glycogen, predominantly from muscles).  This decreases the circulating blood glucose, therefore the amount filtering through the brain.

And it brings on a more tone appearance AND gives off some feel good body-made chemicals that blow any man-made ones out of the water.  Win-win if you ask me.

Wrangle your stressors.  It doesn’t matter the source of your stress.  And let’s just be real, most of our modern First World stress is mental and emotional.  It registers all the same, the body doesn’t know the difference.  Stress is stress.  And it is constant.  The all day, every day kind of constant.

First the stress raises cortisol which in turn raises blood sugar level.  You know so you can have enough circulating glucose to fuel muscles as you try to outrun that tiger, because that is how we are wired.  (Tiger need not be present…financial or marital troubles could be your “tiger”.)

In response the body releases more insulin to meet the heightened blood glucose levels.  But that isn’t effective.

The double part of the whammy is that cortisol inhibits insulin’s effectiveness.  The long and short of it is the higher blood glucose cannot be ushered into the cells.

The third and absolute biggest bang for your risk-decreasing buck…

Lowering your carbohydrate intake will have the biggest impact on obtaining and maintaining healthy blood sugar levels.  If you don’t put it in, it’s not going to be registered on any blood test.  Here’s another “no matter the source” situation…your body doesn’t care where the carbs come from.  Every carb turns into glucose as it is metabolized.  A carb is a carb.  So make them count!  Eat sources of carbs that bring nourishing micronutrients…and slather them in healing fats while you’re at it.  Vegetables were made as a vehicle for fat.

How low is low enough?  I want to see it so low your body goes into a state of nutritional ketosis.  Therefore…

Finding of the relationship between AD and fasting blood glucose gives us an opportunity to prevent a very debilitating disease.  Folks I talk to fear losing their mental faculties more than their physical abilities…I am right there with them.  I don’t want to forget my kids, breaks my heart thinking about it!

Remember those with a high-normal range level of fasting blood glucose have similar brain metabolic activity of those who carry the Apo E4 gene.  Do you know if you’re a carrier?  I don’t and I’m not waiting to find out.  Neither should you.

And quite frankly, if you’re already on the Diabetes spectrum (Metabolic Syndrome, or diagnosed pre-diabetic to full-blown disease) switching from the Standard American Diet (SAD) to a Well-Formulated Ketogenic Diet (WFKD) is a huge step in the right direction.

If you’re an Apo E4 carrier AND have any blood glucose issues…please take my advice to heart and take action.  Today.

Stack the deck in your favor…

Please share this blog with your circle of influence…you never know who needs to know this information.