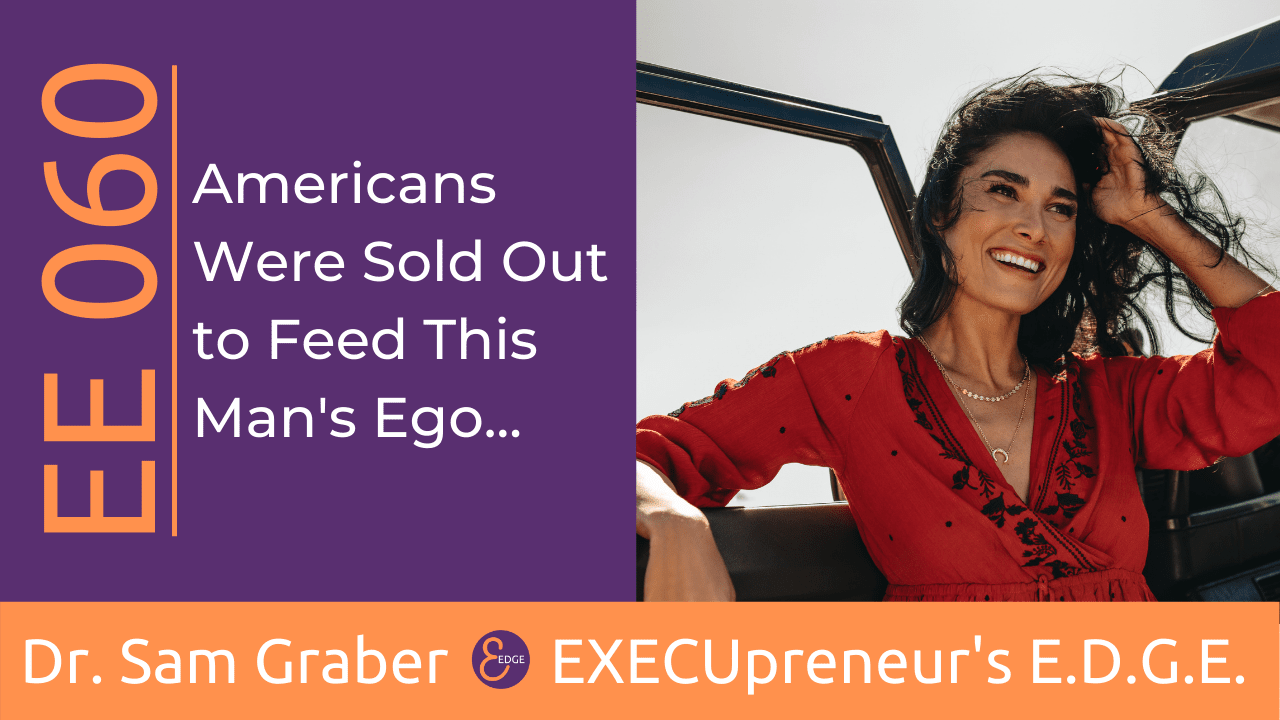 EE 060: Americans Were Sold Out to Feed This Man’s Ego

A few posts back on the EXECUpreneur’s EDGE blog, I debunked one of the tallest nutrition tales ever  told  sold.  Remember the “Cholesterol is your enemy…and other nonsense you should ignore” expose?  I received an overwhelming amount of feedback on that post.  Readers shared with me that they had never heard it explained in “real people’s” language and were thankful I blended the science with simple explanations.

The “Cholesterol is your enemy” theory was based upon some of the most flawed “research” ever passed off as legit.   It started with a guy named Ancel Keys.  Keys was well respected in the scientific community.  He held a few degrees, he worked at a university and he had the ear of his colleagues.  He spearheaded work in the human nutrition arena, most notably he developed K-rations and brought the Mediterranean diet to the West…well, at least his take on it.

Those aside, he is most lauded for his work simply referred to as “the lipid hypothesis.”  The bottom-line conclusion of the lipid hypothesis was that meat, eggs and butter were bad for you and should therefore be replaced by corn oil, margarine, chicken and cold cereal.  This hypothesis fed into the “breakfast is the most important meal of the day” hype I also debunked a post or two back…read about it here.

Ancel Keys and his research team were a high-ticket line-item on the US Government’s budget in the 1950s.  After the September 1955 heart attack of 34th US President Dwight D. Eisenhower, a nationwide war on heart disease was proclaimed.  It was an all-out sprint to find the guilty party and all fingers pointed to saturated fats.  This conclusion left cholesterol in the crosshairs of every American Doc.  And Big Pharma.

The ace in the pocket was Keys…he was already on the taxpayer’s payroll (US Government grants funded much of his work) and it was time to get “our money’s worth”.  Unfortunately this was the beginning of the end of research integrity…and the birth of an era of nutrition policy based upon flawed “science” and politics.

One wonders if the data from Keys’ 7 Country Study was never validated in the interest of saving time and pumping out the winning shot in the War on Heart Disease.

As Keys was a popular name on the nutrition scene already…did his ability to sell his conclusions seal the deal?  One can only wonder at this point.

It is difficult for me to grasp how it all happened, what realities and truths were disregarded, nonetheless the lipid hypothesis (supported by the 7 Country Study) heavily influenced public healthcare policy.

Let me repeat something to help drive it home…the data was NEVER validated, and remained without validity for the latter half of the 20th Century and the start of the 21st.

Here’s how it went down.

Keys reviewed FAO (Food and Agriculture Organization of the UN) & WHO (World Health Organization) data from a very narrow time frame (1948-1949) and plotted 7 countries’ data* with their reported intake of “Fat Calories As % Of Total Calories” along one axis and their “Death Rate per 100,000” which were reported to be related to “Arteriosclerotic And Degenerative Heart Disease” on the other. (*NOTE: England and Wales were combined therefore only 6 data points are plotted.)

Keys then drew an almost perfectly curved line through the data points.  You can view the original graph “FIG.2.  Mortality from degenerative heart disease…” below.

If you know statistics this occurrence is an absolute freaking miracle.  If I had the opportunity, I’d say the following to Keys…”Wow, Dr. Keys…you must be psychic.  You just so happened to get it right and chose the 7 countries (England and Wales combined) on the planet which had the data that when plotted would fall along a perfect progression curve.  And twice in one study!!!  Sir, that is a miracle and you should play the Lotto.”  Admittedly, that would be a little snarky…but at this point, the damage caused warrants some snarkiness.  Scratch that.  A heaping helping of snarkiness!

Also noteworthy is the fact these points of data were only picked for men ages 45-49 and 55-59.  Why was the 50-54 age span excluded?  Your guess is as good as mine (as they likely made for a messier curve).

This research was called a “study” more formally known as “The 7 Countries Study”.  Through this study, Keys made the conclusion that countries with “people” who ate high amounts of “fat” had proportionately higher death numbers caused by cardiovascular disease.  Also noteworthy, all types of dietary fat were lumped into the “fat” category, trans-fats included.  We all know just how wonderful those turned out to be for us.

Now when yours truly read the “original research”, I saw that there were 23 countries (England and Wales are noted as the United Kingdom) in this study and the findings were random.  Check it out for yourself below.  Look at France (#8)…high percentage of fat calories yet the second lowest rate of death from heart disease.  The French sustain life on saturated fats…and lots of them.

What happened to the 16 data points excluded from the final study?

My theory…to meet his agenda, Keys drew a line through the 6 data points closest to a curved line and called it good.  The 16 remaining points ended up on the cutting room floor.  And again, NOBODY double checked his work.  Of note, and startling in itself is the highest incidence of death / highest percentage of fat calories was in the United States.

I have a theory regarding the American data.  Hear me out…the years 1948-1949 were those that followed two back-to-back high stress periods, the Great Depression and World War II.  Both of which resulted in severe rationing of food, notably when animal sources of fat calories were greatly rationed so cheaper plant based oils took a front seat.  There was also a major increase in pounds of sugar consumed per person across the board.  Big Food was on an advertising rampage, making serious bank and their friends at the American Heart Association were itching to get in on the profits.

I know, you think the American Heart Association is your ally.  They are not.  Not one bit.  Look into their history, most notably their policy makers and their financial backers from the start.  Compare it to those who influence Big Pharma.  Now how about the FDA higher-ups?  Yes, look there too.

Are you ready to lose your mind now that you see just how far these ba$t@7d$ have gone to profit from your pain!?!

I lost mine a long time ago, so welcome to my world.  On the upside, we have red wine, bacon and butter, so it’s all good here!

Big Pharma wanted their piece of the “Vilify Cholesterol Pie” so when statins were discovered to lower serum cholesterol, they jumped on the We Hate Cholesterol Express and began a smear campaign of epic proportions.  This gave the “healthcare” system carte blanche recommending statins and essentially bullying everyone over 40 with “elevated cholesterol” into taking them.  Forever.

I find it interesting that any time a drug capable of decreasing serum cholesterol even lower is awarded a patent, the national acceptable range of cholesterol is lowered.  Just something to chew on with your bacon…

If you read my admittedly rather lengthy post on cholesterol, you are now more informed than 98% of the population when it comes to the intricacies of cholesterol.  If you haven’t read it yet, make that next on your “To Read” list…once you do, you will no longer be a pawn in Big Pharma’s game of Ca$h Chess.

The next move is yours.  Be strategic.  Be UNconventional.