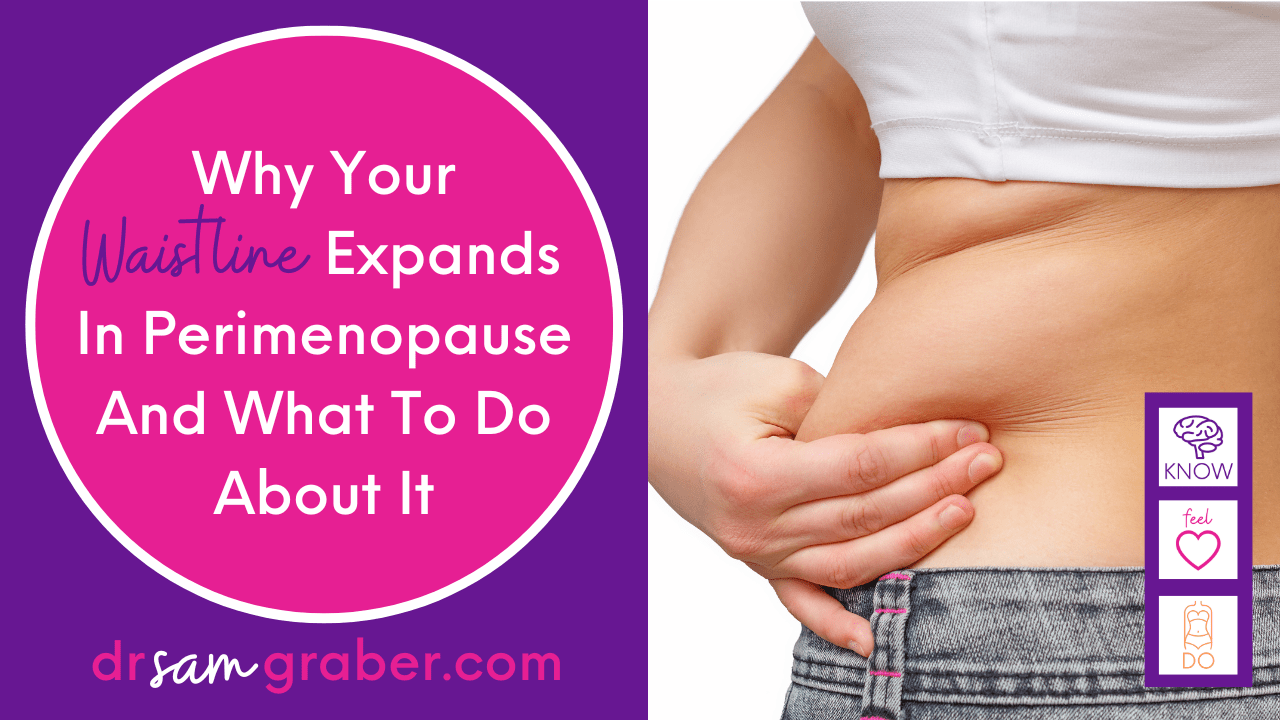 Why Your Waistline Expands In Perimenopause And What To Do About It (HINT: It Isn’t “Eat Less & Move More”.)

If you’re a woman in midlife and your waistline is expanding, your energy is plummeting, and all-in-all you just don’t feel like “you”, please hear this: you are not broken.

You’re most likely in perimenopause.

And that very natural stage in a woman’s life coupled with a common metabolic issue, added to the constant state of stress women experience is the root cause of this troubling trio.

It boils down to biochemistry…I know, I know…*snore*. But stick with me for a hot minute.

There are thousands of metabolic chemical interactions happening in your body at any given moment. To attempt to rattle them off would be futile and take me days, so I will spare you the details. But I do want you to be aware of a few specific interactions for our discussion.

Cool thing is you don’t need to know them in detail or even have a cursory understanding for them to be humming along doing their thing. Thankfully we don’t have to even think about all this biochemistry stuff for our amazingly smart (and resilient) bodies to work.

Whew…you can keep that off the ever-expanding “To Do List”!

I’m going to compress a ton of biochemistry into this article, and I promise it will be as non-boring as possible. There are certain things we need to talk about before we talk about metabolism and how it affects our weight.

If you’re like the vast majority of midlife women I know, you’ve noticed a little more padding around your midsection and what you used to do to get rid of it isn’t working. Not in the least.

We pack on body fat during midlife for a few reasons and all but a small few of those reasons are hormonal in nature. Yes. You are, in fact, hormonal.

The same thing happens, but in reverse, as women hit midlife.

Estrogen is the main player here, and she has three “personalities” (chemical forms). Each has a starring role at a different stage in our life.

When we’re in our reproductive phase, the main player is estradiol and she is made in our ovaries.

When our ovaries go into retirement and are no longer interested in propagating the species, our estrogen profile switches to a more estrone-dominant lead.

Interesting fact to bring up, the reason we put on fat around our midsection as we hit midlife is that body fat produces estrone and as the ovaries start to plan their retirement party, body fat gets the nod. Our adrenals add some estrogen to the mix (all 3 variants), but all too often they’re too exhausted from fighting off the “dragons” we slay day after day to make much in the way of a contribution.

Body fat has to make up the difference.

As we switch from one estrogen leading lady (dominance) to another our cells go into a detox of sorts. As cells are coming off the dependence on estradiol and switching to estrone, which is many times less potent and much less prevalent, our cells can go through withdrawals. But they are designed for this and when all the other hormones are in sync, playing well with one another, women transition through menopause with ease.

It is when our hormonic symphony is out of tune that we have menopausal symptoms. These symptoms are not “normal”, but they are oh so common because most women arrive at perimenopause absolutely exhausted, insulin resistant, and emotionally distraught.

Here’s where the sex hormones and our metabolic hormones play a role in how and where we store our body fat.

Just as most things Mother Nature reigns over, our hormones have a hierarchy.

For the most part Oxytocin is at the top of the hormonal hierarchy due to the fact that upping our oxytocin helps optimize the other hormones listed. Cortisol takes priority over insulin and our sex hormones because what is best for the species when cortisol is on scene is survival. Survival trumps sex (reproduction) every time.

Insulin is the hormone that tells our cells to store nutrients and energy, or to shunt nutrients elsewhere. It works beautifully, until it falls off the rails.

This derailment is what is known as insulin resistance.

In short, insulin resistance occurs when cells develop selective hearing to hormonal signals telling the cell to burn fuel for energy or to store it.

It is estimated that 88% of American adults are insulin resistant. It stems from what we eat and the fact that when following conventional wisdom, we are grazing all day long.

I’ll dive deeper into this phenomenon in this series, but for now this explanation will suffice.

Getting To The Root Of The Problem

In the case of our metabolism gone awry, the initial issues don’t seem to be related to your blood sugar levels. But this is where it all starts.

The underlying metabolism derailment shows up as high LDL, high triglycerides (TG), High Blood Pressure, an expanding waistline, crummy energy, and low protective “cholesterol” (HDL). When a few of these issues are present in a person, they are diagnosed with Metabolic Syndrome.

“Metabolic”. Here’s the first clue it is a problem caused by food…AND, the medical community even named it!

Despite the name, you come out of the doc’s office, scripts in hand . . . a statin for the cholesterol, an Angiotensin Converting Enzyme (ACE) inhibitor for the High Blood Pressure, maybe a pill that obliterates your appetite so you “don’t eat so much”, and so on.

Boom…nice little drug cocktail for you.

Hundred$, if not thousand$ a month for Big Pharma.

If you had a spot on your lung, your doctor would immediately recommend you stop smoking. But in our obesity/blood sugar spectrum gone awry, your doc flies right past the “what’s causing the problem” stop on our tour, and lands smack dab in the pharmacy. Not one mention of stopping the offending activity.

What Is The Offending Activity?

It is the consumption of carbohydrates. More specifically, it is eating more carbohydrates than the body can put to good use.

Since carbs provide no structural support for any cells whatsoever, their only purpose in the body is for use as fuel. When they can’t be used as immediate fuel, for reasons we’ll get to in this series, the body has to do something with them. So it stores them for later.

One way it does this is by shoving these carbs (broken down into individual sugar molecules) into the liver, muscle and fat cells.

In many cases, since “later” never comes…the fat cell becomes long-term storage. Just how long depends on the individual’s biochemistry.

Spoiler alert: you could pretty well classify excess body fat as an inability to use carbs efficiently for fuel. In other words a “carbohydrate intolerance.”

So unlike our smoking scenario (quit the offending activity), your doc recommends you eat “better carbs” and “manage” your sugars and weight with DRUGS.

Across the board, eating carbs is touted as essential to a “balanced” diet and a necessity for all humans. To the carb-intolerant, carbs are their nemesis.

THAT is the question of all questions. You’re not going to like the answer. The long and the short of it is: ignorance and “this is how we’ve always done it” -itis, and there’s lots and lots of money in managing symptoms.

Oh, and not to mention, they think you’re too lazy to actually do anything about your problem. (Their thoughts, not mine.)

What Can You Do About Your Expanding Waistline?

The starting point for many when it comes to storing excess energy as fat lies at the feet of how your body responds to carbohydrate consumption.

How much is too much and what’s the bottom line to keep YOU from becoming insulin resistant?

If you don’t track (Step # 2), you won’t know. (See my blog post “The Number One Reason Midlife Women Seek My Help And Why It Bums Me Out.”.)

Some people can be flexible with their food sources. Others have to mind every single molecule of glucose, well almost to that extent.  That is, until the metabolism is streamlined.

There are absolutely no scientific studies that prove carbs are essential. Or, that they balance out the diet.

Now we need foods that have carbs, like vegetables and fruits. FYI: I am specifically referring to the non-GMO, unadulterated versions because they provide essential nutrients and fiber. Make no mistake, it is not the “carbohydrate” that is essential. It is the nutrient alongside the carbohydrate. It is the fiber. These are the extent of our need for carbohydrate-containing foods.

If you’re over 40, you’ve thought or been told that your excess fat stems from a hormone problem. I know I sure thought that!

Let me shed a little light on this topic without diving in head first without a helmet. Technically you do suffer from a hormone problem.

There, I said it again.

It’s just not necessarily one of the few in the crosshairs of Conventional Wisdom.

One of the crux manifestations of said hormone issue is that insulin resistance leads to your blood glucose level not being maintained in the healthy range. This, in turn, leads to Metabolic Syndrome, which ultimately leads to Diabetes Type 2 (usually within five years after Metabolic Syndrome sets in) as well as a whole host of other named chronic diseases.

I know this is a little nerdy, but I also know the better you understand how your body works, the better you can care for it, just like anything in life. But hello…your body???

This is your most important asset!

Step # 6 is the most confusing for people. Because literally, we need to be in a recovery group for this one!

If you’re over 40, like me, you grew up in the low-fat/nonfat craze. It was crammed down our throat that fat made us fat and clogged our arteries like it was on a murderous rampage.

I shudder at the memory of eating rice cakes and non-fat cookies. I mean, what’s the point of living if all we get to eat is that cardboard!

We’ve been led to believe (and still are) that animal sources of natural fats are out to kill us and seed oils that are refined, bleached and deodorized are better for us than nature.

The “Fat Kills” belief has been refuted over and over again. Despite that victory, the public is still being misled to believe that fat and cholesterol are Public Enemies # 1 & 2.

You need to favor healing fats like coconut oil, ghee, and butter. Leaving seed and grain oils on the shelf. They don’t belong in our bodies. There’s no such thing as a “canola”. It was created in a lab to be a cheap alternative to real oil, and it does not spoil.

If you want to stop your waistline’s expansion and stack the fat loss deck in your favor, grab my Top 10 Tips To Jumpstart Your Sluggish Metabolism then take immediate action (Step # 1 of the 12-Step Strategy For A Body & Brain That Just Won’t Quit).