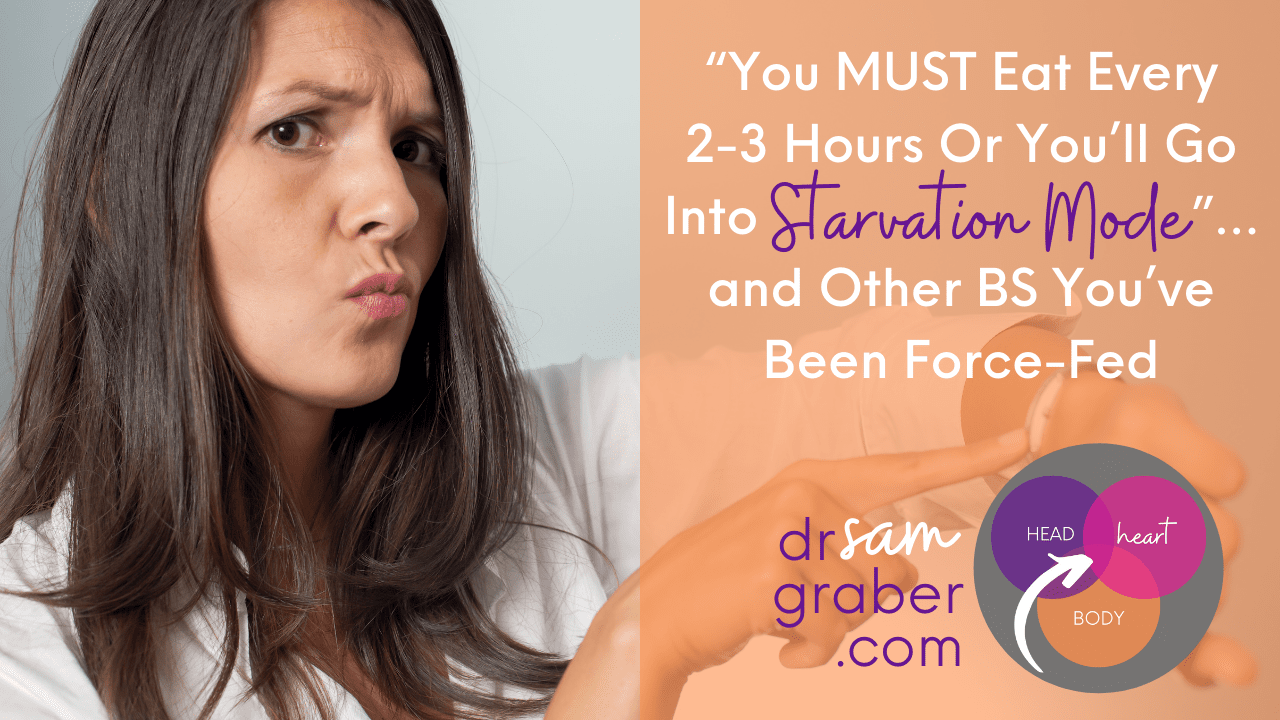 “You MUST eat every 2-3 hours or you’ll go into starvation mode.”

We’ve all heard Conventional Wisdom’s reasoning behind the “eat every 2-3 hours” chant.  “It will stoke your metabolic fire.” “You’ll have more energy.” And my favorite, “You’ll burn more calories”.  Sorry to say, they’re all wrong.

Truth is, whether frequent or all at once, the body burns the same amount of energy (thermic effect of food or TEF) when digesting food.  It accounts for about 10% of the total calories, on average.  Whether you eat three 500 calorie meals and two 250 calorie snacks or one 2000 calorie meal per day, your body burns the same amount of energy as a result.  Maybe you’ve been told that you’ll be less hungry if you have more frequent feedings.  Unchecked, this makes sense.  You know, “stoke the metabolic fire”.

This is simply not true.

Now what is true is that we are actually conditioning our body to want food at certain increments, on a schedule of sorts, by feeding it so often.  Our blood sugar/insulin dance gets all out of whack and causes major energy dips when we’re conditioned for frequent feedings.

We’ve bought the “eat every 2-3 hours” BS hook, line and sinker because it’s been repeated so often, it’s become Conventional Wisdom.  Still doesn’t make it right.  The flat-earthers were wrong too.

From experience, eating every 2-3 three hours takes up some major time and mental energy every day!   And all that chewing!!  Maybe they were counting that as exercise when they came up with the lie.

In all reality, we become enslaved to food… and can be liberated with very little resistance when we follow the right strategy.

Let’s turn our attention to “starvation mode”.  It is brought up often when folks are trying to argue against caloric restriction or skipping meals which is the antithesis to “eat every 2-3 hours to stoke your metabolic fire”.  If you’ve ever done a search for “best method to lose weight”, you’ll agree…there is a ton of contradicting information on the web.

In fact much of it is just marketing hype.

One of the traps used in marketing hype is “starvation mode”.  It is used erroneously in just about every instance.  A healthy body that is losing weight through a caloric deficit will in time slow down its basal metabolic rate to meet its new set point.  This can render a couple hundred calories’ difference.  And when pairing caloric deficit with frequent feedings this “metabolic slowdown” is likely.

Pair caloric restriction with intermittent fasting and you’ll actually experience a revving up of the metabolic rate.

“Starvation mode” sounds rather frightening doesn’t it?  Sure gets one’s attention.

Just so you know, there is really no chance that a healthy human will ever fall victim to real starvation by restricting calories for weight loss…that is, a reasonable deficit in calories.

Now because we’ve wreaked such havoc on our metabolism, our body will go into a “fake starvation mode” of sorts in reaction to its faulty response to leptin.  Leptin is your “stop eating” signal.  When we pack on more body fat it disrupts the brain’s ability to respond to leptin.  In turn the “hey stop eating now” signal isn’t heard.  The body acts as if it is starving.  It most definitely is not.  But, we continue to eat.  And eat.

It is wrongly assumed that body fat is sitting there on our hips, butt, back, thighs and bellies insidiously.  Nothing could be further from the truth.  It paves a path of destruction with inflammation as the glue holding it all together.

Body fat is the cellular equivalent to a signal jammer.

The biggest concern with “starvation mode” is the loss of lean muscle tissue for the purpose of creating glucose for the brain’s use.  The brain requires a minute amount of glucose for some of its functions when our primary fuel is fat.  Your brain will signal for some glucose here and there and your body will happily provide it from its ample stores and you’ll not even notice it one bit.  It happens in the background and is nothing to fear.

If you believed the hype you’d think your brain was an energy hog and would sacrifice your precious lean body mass for its greed.

It doesn’t happen that way.  The process is gluconeogenesis and it is a demand-driven process.  Meaning only if you are completely devoid of any other source of glucose and you are still a sugar burner will you break down certain amino acids into glucose.

But only when your body is under severe stress, like running a marathon.

And justification enough to never do those things!  All kidding aside (though I’m not really kidding)…the cool thing is that when you are a fat burner and fat-adapted, you have little to no need to concern yourself with this process.

It is estimated that even a thin person has up to 40,000 calories readily available in their body’s fat stores.  The average muscle and liver glycogen stores (stored glucose) is only about 2000.  Sugar burners only have access to the 2000 calories in glycogen…those who are fat fueled have ready access to the 40,000.  In case your math muscle isn’t flexing right, that is 38,000 more calories available for fuel.  The fat adapted have enough fuel to live for days without a morsel eaten!

Talk about an untapped resource!