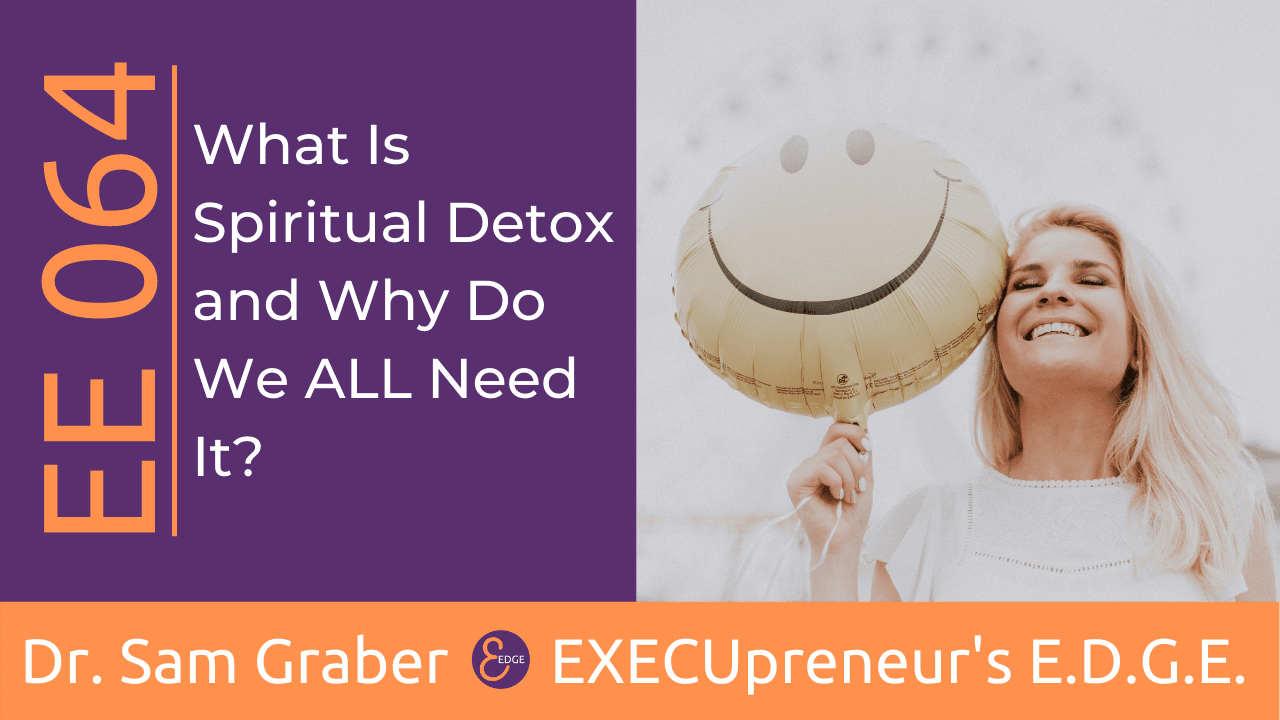 EE 064: What Is Spiritual Detox and Why Do We ALL Need It?

Usually, when you mention the word spirituality, people get a little nervous. I’m sure you don’t need me to remind you that spirituality is a fairly touchy subject in our day and age. After all, personal autonomy is our number one value, and anything that we feel impedes or limits that sense of personal autonomy, is problematic. Am I right?

Either we’re suspicious of it, dismissive, or we oppose it. It is something that we view as a problem. While most of us are perfectly okay with other people being spiritual, we definitely have an issue with others imposing their spirituality on us no matter how subtle it may be.

It may seem immaterial, it might even seem foolish, but a sense of purpose can go a long way. You have to understand that the big challenge of life is not so much how to figure out what to do and how to do things, or when to do them, and who to do it with. Those are the technical details. Most of us are smart enough to be able to figure those out.

The real challenge in life is why we do things. What is it about that certain activity that enables us to try again and again despite all the discouragement, failures, and setbacks that life throws our way? In other words, it’s all about purpose. Because let me tell you, you can tell somebody what to do, and they probably won’t perform as well, compared to how they would do if you gave them a sense of meaning.

They will find the strength they need to keep going despite the challenges and setbacks.

Believe it or not, we’re surrounding ourselves with toxins that eat away at our sense of purpose. They eat away at our ability to turn our ideas into things that we can see, touch, taste, smell, and hear.

They eat away at our ability to claim and shape the reality we want for ourselves. The human being is the most powerful creature in the universe, and the problem is most people are all too content to live their lives like worms, or slugs. Tragic…agreed?

When people think of pollutants, they think about chemicals, radiation, or pesticide residue. No matter how natural or unnatural the pollutant is, at the end of the day, most people define pollutants in purely physical terms. This really is too bad because the real pollutants that we have to worry about in our lives are not necessarily things that we can detect.

But the problem is the most dangerous pollutants in our lives are things that we cannot see. These eat away into our sense of purpose. These pollutants and toxins distort our sense of personhood. They change our mindsets in dangerous ways. No matter how you define it, and regardless of the angle from which you look at these issues, it is bad news. Now if you’re still unclear, here are the three most common forms of invisible non-material pollutants.

The sooner you let go of these, the better your life will be. If you’re feeling stuck, frustrated, desperate, depressed or simply bummed out, maybe it’s because you’ve exposed yourself to these invisible non-material pollutants. Just because you can’t readily see them, doesn’t take their danger away.

When you are constantly comparing your looks, your wealth, your physical traits, your personality, or anything else to somebody else, you are polluting your mind. You’re filling your life with junk and you will eventually have nothing to show for it.

You spend a tremendous amount of mental and emotional energy going through the comparison, but you know full well that the outcome is all too predictable. The outcome is, you lose. The reason why people compare themselves in the first place is because they’re comparing something that they don’t have to something that somebody else has.

Have you ever done this? Maybe while scrolling through social media. (I think we all have. The key is stopping yourself in the act and reframing your thoughts ASAP.)

The Buddha said that the root of all human suffering is desire. There’s a lot of truth to this. When you spend a tremendous amount of your time coveting or desiring things that other people have, what are you doing to yourself?

The second thing that you do when you’re constantly desiring is that you are directing energy from creation to envy. Envy is not creation. You’re not building something. You’re not focusing your creative powers to where they should go. You’re not planting. Instead, you’re thinking about stealing (in some way, shape, or form). You are thinking about how you’ve been left behind because somebody has the things that you desire. You’re beating yourself up.

This is a biggie.  One of the worst ways we can spend our time is to focus on the past. The past already happened. It already hurt, it already cut, it already did a number on us. Why do you want to keep reliving it? Now, a lot of people try to play games with themselves and say, “Well I try to remember because I don’t want that traumatic event to happen again.” Alright…fair enough.

But the problem is when you pay close attention to what you’re actually doing, when you’re remembering things from the past and compare with what you’re actually feeling, you’re not learning; far from it. Instead, you are reliving the memory because you’re trying to do something about it, without doing something about it. It’s like a mental treadmill.  You may be doing a whole lot of work.  Spending a whole lot of energy.  Yet ending up exactly where you began.I know it sounds futile, because it is. That’s like trying to change the weather by walking around and chewing gum. There’s no logical connection. Just because you feel bad about your ex-boyfriend, doesn’t mean that all this negative emotional energy and catharsis is somehow, someway going to change him. He’s moved on, he is living his life. It’s high time you lived yours. To overcome the power of spiritual pollutants in your life, you must do a self-audit of your thoughts….on the regular.  Stay plugged into the conversation supporting all things you (only improved) through the EXECUprenuer’s EDGE blog and the accompanying podcast.